From S4wiki
(Redirected from N75)
Jump to navigation Jump to search

If valve doesn't seal when power off (both before and during Output test) or if both short ports don't flow air (interconnected)= bad N75. 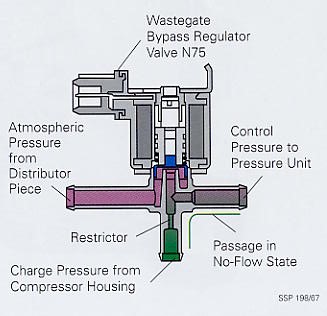 In your imagination, connect the outlet of high pressure from the Impeller (blue) in Figure 1 to the bottom inlet (green) in Figure 2, and the right side outlet (gray) in Figure 2 to the Waste Gate actuator (Pressure Unit) in Figure 1.

Here's how this appears to work:

A "No-Flow State" exists during idle, when there is no boost and the Waste Gate is held shut by the spring in its actuator (Pressure Unit).

When you step on the accelerator, boost builds up, and so does the pressure in the green bottom port of Figure 2. This also pressurizes the gray outlet of N75 leading to the actuator (Pressure Unit) in Figure 1. Once the air pressure in that actuator overcomes the spring pressure, the Waste Gate opens and allows some of the exhaust gases to bypass the turbine wheel. However, this action alone would open the Waste gate at lower boost pressures than are desirable. Here's where N75 comes in.

Notice the Restrictor in Figure 2. It allows only a small amount of air to enter from the green port below. As a, result the pressure above the Restrictor (that goes to the Waste Gate actuator) can be regulated by bleeding off controlled amounts of air through the left side purple port of N75. The bleed-off rate is controlled by how far the electric coil pulls up its central plunger, allowing air to escape under the blue cap at its bottom. That pull-up distance is precisely controlled by a pulse width modulated signal from the ECU. To achieve the intended results, N75 is factory calibrated by a screw above the plunger that sets the proper spring pressure of a spring between the plunger and the blue cap.

It's easy to see that one might get a little more boost by turning the calibration screw up a bit, thus increasing the bleed-off rate and reducing the pressure to the Waste Gate actuator. But wait, if the ECU finds the boost higher than expects, it will modify its signal to N75 to correct the situation within limits. If those limits are exceeded, surging will set in, particularly under part load.

As i see many of you are totally confused about the N75 valve (what it does, how is it working), just exactly as i was before digging myself into the topic quite deeply. My car was seriously down on power - i even posted some desperate topics here too, but noone was able to give me any usable suggestions/answers. At the end, i found that there was some problem with my N75 valve (though it was working OK) which prevented the car to produce more boost than stock.

So, if any of you has problems with the N75 valve - or just got problems but don't really know what is it related to, then read more further.

The turbo, the boost it produces, the N75 and the ECU.

These are the most important things which you have to focus on. As we know, we got a turbo on our engine which produces boost. The turbo is "driven" by the exhaust gasses our engine produces. Exhaust spools up the turbine in the turbo which is mounted on the same driveshaft as the compressor which then generates boost. I persume it is all clear for everybody.

There is a wastegate on our turbos (as usually on every turbo) which looks like a simple valve, just exactly like in the cylinderhead. There's a difference though, the valves in the head are operated by the cams, the valve (wastegate) in the turbo is operated by pressurized air. When pressurized air is introduced to the wastegate, it will open, enabling the exhaust gasses to escape and skip the turbo. This will result in a dramatical loss of boost, because there will be no gas which would spin the turbo. I bet this is (was) also clear for everybody.

But how is this all hooked up???

Quite simply. The wastegate is operated by the turbo itself. The boost the turbo produces is directly fed to its own wastegate. What does this mean? When the turbo spools up, it will create boost and this boost will open its own wastegate, shutting itself automatically down.

Here comes the N75 valve. The N75 valve is inserted between the turbo's high pressure output and the wastegate. If the turbo would directly linked to the wastegate, it would not be able to produce lets say more than 0.3-0.4 bar of boost, because it would shut itself down immediately. When the ECU wants more boost (because you are stepping on it for example), it WENTS some air from this loop (turbo--->wastegate) so the wastegate will not open at all, or will open later.

The N75 has got 1 boost input, and 2 outputs. At the input, boost is entering into the N75 and exits on one of the outputs going to the wastegate. When N75 is closed (default state), all the boost goes to the wastegate. When ECU opens the N75 valve (because it has got an electrical plug too coming from ECU), so when ECU opens it, some of this boost (which would operate the wastegate) is leaving/leaking back to the inlet (and not opening wastegate). Since the N75 valve has NO state in between, is is opened or closed. The ECU switches it ON/OFF all the time (several times a second) to generate the desired amount of boost. Doesn't it reminds you to something???? ... Yeah, it's surging. But it is absolutely normal, this is how ECU controls the wastegate. When a car is chipped, the boost is a LOT higher than it is designed to operate on, so this kind of boost control will be noticable.

By adjusting the N75 valve, you can adjust the amount of air which should leave when the N75 is opened. If you adjust the N75 to the right, you will "close" the N75 valve, so just a few amounts of air is wented from the wastegate which will result in a lot smoother drive (eliminating surging, because the boost will be more constant), BUT at the same time it will introduce more boost to the wastegate, causing LESS overall boost. Adjusting the N75 valve to the left will "open" it, enabling more air to escape from the wastegate when N75 is opened, which will result in more boost (coz wastegate wont open), BUT at the same time it MAY cause surging as the N75 opening/closing will be more obvious.

And finally, here are some useful links to our forums where we dealt with some problems which helped us to understand the operation of the N75 valve.